Nude not Naked in Norway 2 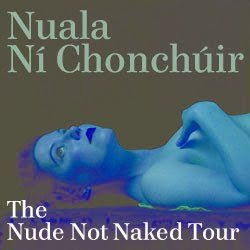 Please extend a very warm welcome on a chilly Norwegian day to Irish writer Nuala Ní Chonchúir who is stopping by as part of her virtual world tour to answer questions about her short story collection ‘Nude’ as well as her writing career in general. As I mentioned in a previous post, Nuala was heralded as a person to watch in 2009 by none other than that bastion of good taste, ‘The Irish Times’. And what a year it has been for Nuala so far. A third child, a third book and finally, after several years of perseverance, imminent publication of her first novel ‘You’, scheduled for early 2010.

Nuala, we were at Trinity College Dublin at the same time but while I was drowning my sorrows in pints of Guinness because I’d made a mistake in signing up for a degree in engineering, you were, I imagine, hanging out at the arts library with literate and interesting people. You studied Irish at university; did this in any way reflect your career aspirations at the time? You have won or have been shortlisted for several short story competitions. I wonder if there was a particular publication or competition win after which you felt you could call yourself a writer out loud or was that never an issue for you?

I never had any real career aspirations other than to be a writer but I didn’t quite know how you did that as a job. I was always writing but I worked in a theatre, a bookshop, a library and eventually in a writers’ centre; I left there to go full time as a writer 5 years ago.
I had been educated through Irish and I just loved the language. I wanted to go to Trinity from the time I was four. I went to school in the city centre and I’d pass Trinners and say, ‘I’m going to go there’.
I was a member of An Cumann Gaelach in college (The Irish Society) and we had the best fun, putting on céilís (dances), plays and an arts week and generally drinking lots of Guinness, wine, whatever...
I still hate telling people I’m a writer – mostly they don’t understand what it entails. Or why they haven’t heard of me...But I’m comfortable with it as a label for myself – it’s personally defining.

I wonder if you could tell us a little about your path to publication. Do you have an agent? How did publication of this collection come about and why another collection of short stories – your third – as opposed to a longer work?

My first book was a poetry collection, my second a short fiction collection, which the publisher, Arlen House, asked for.
I wanted to be published in the UK, so I sent the MS of Nude to Salt in January 2008. They accepted it in October that year and it was published in September 2009. Publishing is a SLOW world.
My novel – due April 2010 – could have been out years ago but it was rejected many times before it finally found its home with New Island. So the stories in Nude were written after the novel. One doesn’t have much control over when the work appears.
I did have an agent but I sold all my work myself, so I no longer felt I needed that agent. I am in the market for a new one though!


Your name is very Irish Nuala, but this short story collection is very eclectic in your choice of international settings and characters, with little of the usual Irish topics of catholic guilt, sexual inhibition, dysfunctional families, small town claustrophobia etc. In fact your writing is sexually uninhibited (Note: Nuala writes great sex!) with the themes of lust and art cropping up over and over, even when not central to a story. I can understand the fascination with relationships, specifically sexual ones, but where does this fascination and knowledge of art come from?

The dysfunctional stuff is in my novel but in a humorous way (!). I’m not a huge fan of all that dreary Irish stuff. Some writers do it brilliantly though, like Anne Enright.
All my family are into art – my parents both paint a bit and the buy and sell antiques and bric-a-brac, so there were always nice pictures at home. I enjoy painting as a hobby and I’d love to be good at it – I’m in awe of the skills of brilliant visual artists. I loved art history as much as drawing at school and I just continued that interest into my adult life. I adore art galleries.

This is your third short story collection. Have any of your characters tempted you into a longer work, refusing to allow themselves to be restrained within the short story form?

My novel You, that is coming out next year, grew out of a short story from my first collection. The narrator – a 10 year old girl – stayed with me and I realised I wanted to keep writing as that character. It’s written in the second person which is a voice I really enjoy writing.

You maintain a blog at womenrulewriter.blogspot.com. Can you remember what prompted you to start blogging? Has blogging helped you reach new readers?

I was reading other people’s blogs and really enjoyed what I read about their writing lives. I thought, ‘I could do that’. I was also fascinated by their ability to self-promote and I knew I needed to try that if Nude was going to garner any attention. Writers really have to get behind their books’ promotion these days and I saw blogging as a way to do that.
I have met so many brilliant writers through blogging – online and some in person – and they are a great support network to have. I have definitely got a new readership through my blog.

Thank you for including Norway on your world tour Nuala and for your wonderful insights into the the writing life. Wishing you continued success with ‘Nude’ and your other writing adventures.

Big thanks to you, Johanna, for having me here in Norway – I love the questions you asked, they are very different. Best of luck with your novel and next week my virtual tour takes me to England and writer Vanessa Gebbie’s blog. I hope some of your readers will join me there.

'Nude' is available directly from Salt Publishers and Amazon. I highly recommend it; not only will it look gorgeous on your bookshelf, it is also brimming with beautifully-written stories.

If you'd like to catch up on other stops on Nuala's tour, please visit here.

Congratulations on your success, Nuala!

Wonderful opening and a very insightful interview, loved that you hit on sexiness of Nuala’s writing, I totally agree with you, she does write great sex!

Great interview - and it sounds a great book!

Great interview. Great questions and answers. I wish I went to Trinity.
F

Really nice interview. I feel your pain Jpanna, I studied engineering too and looking at those Arts students was like being a child with my nose squashed against ye sweet shoppe window.

Great interview and Nuala, your name is so musical and lovely!

Another stop on the tour - it's good fun. Congratulations again on the novel, Nuala. Stop knocking the engineering course in Trinity, it was good!

"with the themes of lust and art cropping up over and over, even when not central to a story. I can understand the fascination with relationships, specifically sexual ones, but where does this fascination and knowledge of art come from?"

I like that with this interview, Johanna, you've got behind the "writer" rather than the "written". Really interesting questions! Thanks.

Hi Johanna
Big thanks for having me here as part of my tour and thanks to all the commenters too! Even though my poor cuz iz upset that her beloved Engineering degree was taking a battering! Mea NOT culpa, Clodagh!

My name musical??!! I wish more people thought so - most find it totally impossible to pronounce so I'll take your positivity on that, CarolineG.

Thank you to everyone for all your lovely comments on Nuala's interview.

FD - I was very lucky to go to TCD. Just wish I'd met people like Nuala when I was there :)

Aidan - Thanks for the empathy :)

Apologies from me to Clodagh too. The course was fine; it was me that was qware :) I do have fond very fond but vague memories of the Parsons Building.. and Lincoln Inn, the Pav, the Buttery.

Thanks for the lovely compliments Rachel.

Finally, I hope once Nuala recovers from this world tour, she'll come back again next year to talk to us about 'You' - and of course herself ;)

Excellent interview. I enjoy good short story collections and his sounds like a great read. :) Thanks! :)

Loved the interview, Nuala...and well done on keeping going with the tour momentum, I am about to start mine and wondering how I'll keep at it for 8 weeks or so!

Great interview Johanna and Nuala. Best of luck with the virtual tour of Nude. Johanna looking forward to hearing more about your novel!!

The Hand that First Held Mine by Maggie O'Farrell
Just read and loved:
Arlington Park by Rachel Cusk
One Day by David Nicholls